"Dumka" in a new light

The son of one of the most famous singing couples, the acclaimed and respected pianist Marjan Kiepura (in the picture), recently posted an unusual recording of Fryderyk Chopin's song on the YouTube website "Dumka". He made it as a solo piano piece, dedicating it to the memory of his parents, Marta Eggerth and Jan Kiepura. This is the last of the published songs of our great composer, published for the first time in 1910, on the hundredth anniversary of his birth. 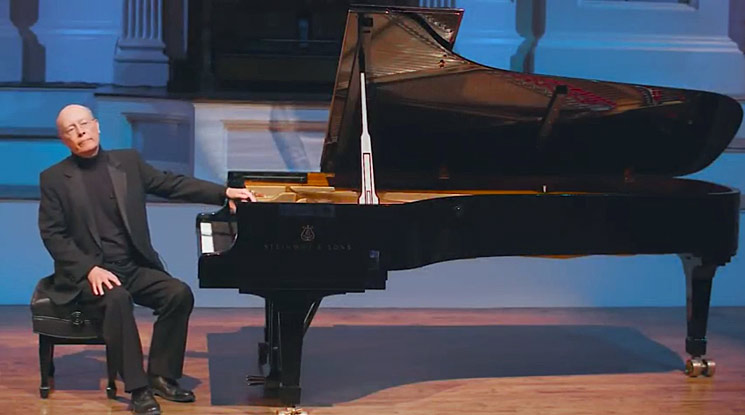 Compliant with the original musical note of the song "Dumka" with the participation of Marjan Kiepura (singing with the accompaniment of the piano) you can listen to the double CD album Marta Eggerth from 2004 "My Life My Song". It is a compilation of various recordings from the whole (70-year-old!) career of this legendary singer, who has in her artistic output works from the field of opera, operetta, songs and numerous performances in music films. On one of the CDs of this collection you can find, among others an operetta duet made with her husband, Jan Kiepura, and three songs by Chopin, in which her son, Marjan Kiepura, accompanies her. As he recalls, his mother - Hungarian nationality - often performed Chopin's songs out of devotion for her husband.

In the performances of Chopin's song, Marta repeatedly accompanied her son, Marjan, who recently discovered that in the case of Dumka, the music line of the accompaniment overlaps exactly with the vocal line and therefore this song can simply be played solo on the piano. As the pianist himself says, "maybe this is a kind of debut(...). Maybe for the first time, today, "Dumka" by Fryderyk Chopin will sound as a solo song "- we hear in the recording from August 21, 2018, placed on YouTube by the publishing house www.patriamusic.com.

During the October visit of Marjan Kiepura in London (the artist lives in America), one could listen to his unusual performance of "Dumka" just as a piece for solo piano. One of the listeners of this performance, the great pianist Tomasz Lis living in the British capital, shared the following reflection: "Fryderyk Chopin's songs occupy quite a specific place in the composer's output as well as in the context of the genre. Rarely performed, and sometimes completely forgotten, despite the undeniable charm, they never entered the mainstream repertoire permanently. Due to their simplified form and quite basic harmonic language, they have been pushed to the margins of the achievements of our great composer. The outstanding pianist Marjan Kiepura came up with an extraordinary idea to perform the last song - "Dumka" - only on the piano, without the participation of the voice. Thanks to Mr. Kiepura, this song has gained a new splendor and can be an excellent addition to mazurkas or as an encore at the end of the recital."

It is worth adding that in the repertoire of Tomasz Lisa Chopin occupies a prominent place, as evidenced by selection of works during his concerts or recordings from his CD "Impromptus" (2014). It is also remarkable that in his above reflection on "Dumka" and Chopin's songs in general, a memory of mazurkas appeared. For many years, Marjan Kiepura has specialized in their performance and sees them as "the key to Chopin's personality, and especially his specifically Polish musical expression." Many recordings of Marjan on YouTube (including mazurkas, "Dumka" for solo piano, and recently also Béla Bartók's compositions) can be accessed via the website patriamusic.com. In the performance of Chopin's and Bartók's works, his wonderful homage to his parents is expressed (Marta Eggerth knew Bartók and sang for him). It also expresses the true passion of Marjan Kiepura for the musical heritage of its cultural roots.

The "Dumka" recordings for solo piano (youtube.com/watch?v=3j783M_aulk) and other pieces made by Patria Productions were made at Mechanics Hall in Worcester (Massachusetts) in cooperation with Pagano Media. The co-producers were Connie Chesebrough and the wife of Marjan Kiepura, Jane Knox-Kiepura.