Marta Eggerth, My Life My Song

Each Song Clip Accompanied by Never Seen Before Historical Photos 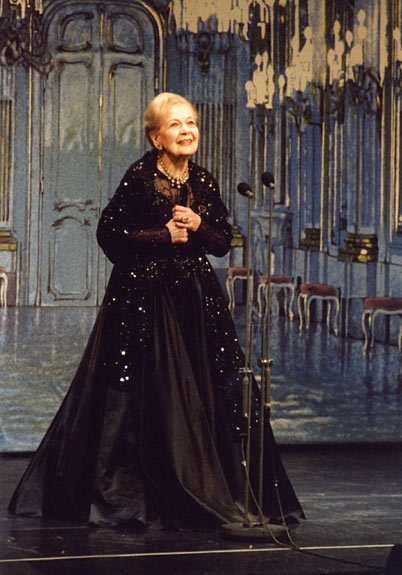 Marta Eggerth in Vienna in 2001; photo by Rolf Bock

March 22, 2018, New York, N.Y. -- Patria Productions is proud to announce that the critically acclaimed dual CD album from 2005, Marta Eggerth, My Life My Song, is now available to view on YouTube. Each song clip is accompanied by historical photos, most never seen before. With this CD, Marta Eggerth's (1912-2013) recorded legacy as one of the world's leading sopranos showcases an international singing career spanning more than 70 years in operetta, film, lieder and opera. It is now available on YouTube for generations of opera aficionados, singers, film buffs, and others to learn from and enjoy.

Marta Eggerth, who passed away at the age of 101 on December 26, 2013, had one of the longest performing careers on record that started when she was 10 years old in 1922, lasting more than 90 years. She remained an active performer singing to enthusiastic audiences until the age of 100. Marta Eggerth and her husband, the celebrated Polish tenor Jan Kiepura, were among the first "crossover" artists singing at a time when the term did not exist.

Marta Eggerth was born in Hungary on April 17, 1912. In 1936, she married Jan Kiepura with whom she sang more than 2000 performances of Franz Lehár's The Merry Widow in five languages and other operettas. Some of the 20th century's most celebrated composers wrote works especially for her including Lehár, Robert Stolz and Paul Abraham.

The selections included in the sound clips from Marta Eggerth, My Life My Song include works from the early 1930s up to 2002 sung at the age of 90.

Marta Eggerth, My Life My Song, CD 1 - includes her early opera recordings of Puccini, Bellini and Rossini, as well as her first opera recordings of arias from La bohème, which she sang both on stage and film. This disc is also dedicated to her many songs made famous by some 41 European movies which she made mostly prior to World War II.

Marta Eggerth, My Life My Song, CD 2 - features recordings from 1955 - 2002 of her favorite repertoire including her own arrangements of medleys from Lehár's The Merry Widow, Emmerich Kálmán's Princess Czardas, and songs by Robert Stolz, Fritz Kreisler and John Kander and Fred Ebb's Married from the Broadway hit musical Cabaret. Also included are Hungarian selections, lieder from Ravel and Chopin, as well as a duet with Jan Kiepura.

Marjan Kiepura, Marta Eggerth and Jan Kiepura's son stated, "When my wife Jane and I named my mother's album "Marta Eggerth, My Life My Song" it reflected the 90 years of her life on stage and screen and the art she gave the world, in six languages. Her last public appearance was at the age of 100 and she passed away at 101."

Videos with Commentary from Marta Eggerth, My Life My Song

Frühlingsstimmen-Walzer by Johann Strauss II, arrangement by Franz, Grothe and C. Amberg
From the film: Das Schloss in Flandern
Performer: Marta Eggerth sung at the age of 24
Conductor: Paul Huehn
Odeon O-7709, Matrix XXB 8606-1, Recorded November 11, 1936 Marta Eggerth is heard in this remarkable arrangement at age 24 with virtuoso coloraturas. A Hungarian, she was discovered by fellow Hungarian, the composer Emmerich Kálmán, who brought her to Vienna, where she championed Viennese repertoire and operettas. She also sang lieder and operatic roles such as Mimi in La bohème.
Merry Widow Medley by Franz Lehár, arrangements in four languages by Marta Eggerth
Performers: Marta Eggeth, age 90; Pianist William Hicks
Recorded: July 2002, New York Marta Eggerth is heard singing her own arrangement of a "Merry Widow" medley at age 90 in 2002. She sang "The Merry Widow" with her husband, the celebrated Polish tenor Jan Kiepura (1902-1966) more than 2000 times in five languages - English, German, French, Italian and Polish. Quoting from The New York Times obituary of December 30, 2013, "For decades, she practically owned the title role in Lehár's most famous operetta, "The Merry Widow." Marta Eggerth was also closely associated with Franz Lehár who composed works especially for her including the music for three of her Pre-War movies.
Pierscien (The Ring) Op. 74, No. 14 by Frederic Chopin, Lyrics by Stefan Witwicki
Performers: Marta Eggerth, age 90, Pianist Marjan Kiepura, her son
Recorded: July 22, 2002, New York Throughout her career as part of her original training, Marta Eggerth always sang lieder. She was close to Chopin's songs and performed them at recitals also owing to her devotion to her husband, the Polish tenor Jan Kiepura. This selection shows another dimension of Marta Eggerth in the lieder genre. Her son, pianist Marjan Kiepura joins her at the piano.
Married by John Kander and lyrics by Fred Ebb from the musical, "Cabaret"
Performers: Marta Eggerth, age 90, Pianist William Hicks
Recorded July 22, 2002, New York Marta Eggerth met Lotte Lenya after a performance of "Cabaret." She encouraged Marta to sing "Married" as a solo piece. When Marta pointed out that this was a duet, Ms. Lenya told her "Oh Marta never mind, sing it as a solo. You'll think of Jan..."
Neapolitan Duet by Franz Lehár from the operetta "Der Zarewitsch"
Performers: Marta Eggerth, age 43 and Jan Kiepura, age 53
Rundfunkorchester, Conducted by L. Weininger
Recorded by the ORF Radio Austria, January 1955, Vienna The duet is an arrangement by Marta Eggerth and Jan Kiepura and evident of their constant inventiveness especially when appearing together. Both the spoken dialogue and the surprise ending in this duet, is one such example. Marjan Kiepura states, "I remember my parents always practicing and striving to find innovative ways to bring happiness to their audiences, to making something special."

Marta Eggerth, My Life My Song, from 2005, was a project that was a long time in the making. The project was headed by Jane Knox, Marta Eggerth's daughter-in-law and the Executive Producer and a Co-Founder of Patria Productions, Inc. along with her husband Marjan Kiepura. The project involved compiling recordings spanning more than 70 years. Family collections were searched and evaluated as well as working with collectors throughout the world.